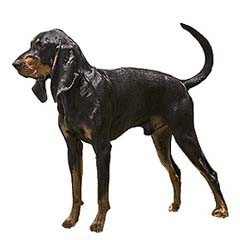 The Black and Tan Coonhound probably arose in the 1700s from crosses of Bloodhounds and Foxhounds, particularly the black and tan Virginia Foxhound. Hunters wanted a dog that could trail raccoons, opossums and bear over the rough terrain of the Appalachian, Blue Ridge, Ozark, and Smoky Mountains, with the trail loyalty of a Bloodhound and speed of a foxhound. The dogs might have to trail for miles, baying all the while so the hunter could tell where they were, and changing the type of baying when the quarry was treed. The Black and Tan, like all Coonhounds, has always been more popular as a hunting dog than companion or show dog, so it wasn't until 1900 that the United Kennel Club recognized the breed. The AKC didn't give them the nod until 1945. A popular competitor at AKC and especially United Kennel Club hunts, it ranks 131stout of 155 with the AKC.

The Black and Tan loves to sniff up a trail and go on a hunt, but he's also a mellow fellow content to lounge around the house -- as long as he gets out for a good walk or jog every day. He does tend to be led by his nose, so letting him off leash can be risky, and never a good bet around traffic. Once he gets wind of an interesting scent, he's oblivious to your frantic calls. An amiable breed that usually gets along well with other dogs, pets, and strangers, the Black and Tan is tolerant of children but tends to be independent and a little stubborn, Not the type of dog that likes to fetch a ball over and over, he'd rather watch you do whatever you're doing, and wait for you to call him to the hunt. He has a deep voice, and may bay and howl. Many owners find this soothing and melodious, but neighbors may be less appreciative.

The Black and Tan Coonhound has an athletic, moderate build, square or slightly longer than tall. His long, low-set ears hang in folds, which may help stir up ground scents. He also has well-developed flews (pendulous hanging upper lips), which may help hold scent around the muzzle. His muzzle is deep, allowing lots of room for his keen olfactory system. He carries his tail high, nearly perpendicular to his back. His coat is short but dense, and his color, of course, is black and tan.

If having a hop-to-it obedience dog is on your list of priorities, keep looking -- the Black and Tan doesn't have “follow orders” on his to-do list. But he can be trained. He doesn't respond well to traditional methods because he can out-stubborn anything you can try. Instead, you need to get his attention by using enticing rewards, and keep that attention by training in short bursts rather than long extended sessions. Clicker training works well for this breed. No matter how hard you train, you won't teach him not to go hunting whenever he has a chance. It's in his blood, so rely on a fence and a leash to keep him safe.

That Coonhound coat needs a quick brushing once a week, to keep shedding under control and to stimulate circulation. Black and Tans can slobber, so you may need to carry a rag with you in warm weather -- and have a good sense of humor when he shakes his head and slings that drool across the room. Keep ears clean and dry, brush teeth daily, and trim nails about once every week or two. Black and Tan Coonhounds need a moderate amount of exercise, usually a good walk or jog every day. They'd rather their exercise take them somewhere, rather than staying home and playing in the yard, because they like to sniff and investigate, and they're not big on organized activities.

The Black and Tan Coonhound's major health concern is hip dysplasia. Hypothyroidism and turning out of the eyelid (ectropion) also may become problems. Any dogs intended for breeding should receive an OFA hip screening first, and be checked for eyelid problems and low thyroid. Ask your breeder about these issues.

Southchase's Warrior Princess (known to her friends as Xena) is the top winning AKC show Black and Tan Coonhound of all time.

© Copyright 2014 LifeLearn Inc. Used and/or modified with permission under license.