Behavior Counseling - Diagnosing a Behavior Problem – Is It Medical or Behavioral? 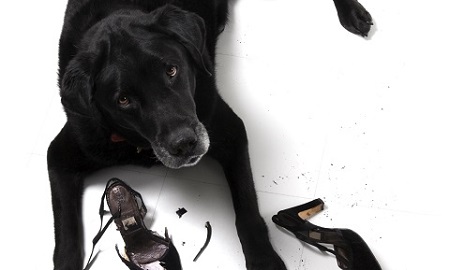 What makes a pet misbehave?

Behavior problems can be due to medical or behavioral causes, or both. A clinical history, physical examination, and diagnostic testing will help determine if there are underlying medical conditions contributing to the problem.

Although there may be a single cause for a behavior problem, it is often the combined effect of the environment and learning on the pet’s mental and physical health that determines behavior.

For example, a pet that is fearful of children may become more reactive, irritable, and aggressive as conditions such as dental problems, arthritis, or an infection make the pet more uncomfortable, painful, or less mobile. Another example is the cat that has been exposed to other cats roaming across its territory, but only begins to mark when it develops an overactive thyroid gland at 10 years of age. Correcting the thyroid problem or providing pain relief as well as behavior modification techniques can resolve some of these problems.

What are some behavioral causes of misbehavior?

Any change in the environment or the daily routine may contribute to the emergence of behavior problems. For example, schedule changes, a new member of the household (baby, spouse), moving, illness or injury of a family member, loss of a family member or another pet, or the addition of a new pet can have a dramatic impact on behavior. Medical or degenerative changes associated with aging may cause the pet to be even more sensitive to these environmental changes.

"Learning also plays a role
in virtually every behavior problem."

Learning (e.g., reinforcement, punishment) also plays a role in virtually every behavior problem. When a pet’s actions result in unpleasant consequences (e.g., punishment), the chances of repeating the behavior will decrease. Punishment might be the application of something unpleasant or the removal of something good (i.e., petting stops if you do that behavior). If a behavior is followed by pleasant consequences such as obtaining food, attention, or affection (rewards), the behavior is likely to be repeated (positive reinforcement). These consequences could be administered unintentionally by the owners, as when the owner gives a reward following a behavior, or obtained by the pet itself through its actions (as when the pet gets a favored treat when rolling around its feeding toy). Although in practice, the goal would be to use rewards to encourage desirable behavior, many undesirable behaviors are encouraged because of rewards. Examples of these rewards include the owner who allows the dog into the house to stop the dog from barking or the dog that finds leftovers in the garbage. Another very powerful form of learning is that of negative reinforcement, where the pet’s behavior is reinforced because something either pleasant or undesirable has been removed. This might be the case when a dog exhibits aggression and the stimulus (person, other animal) retreats. It can be difficult to determine what might be reinforcing a behavior, but if a behavior is ongoing, then (from the pet’s perspective) reinforcement is operating to maintain the problem behavior.

What role do genetics and early experience have in the development of behavior problems?

Some of the most important causes of behavioral problems are genetic and environmental factors, and these might be the most difficult to improve. Genetic factors can influence or even dictate the pet’s response to stimuli. The environment that the pet experienced during its most sensitive periods of development has a major impact on behavioral development. The most sensitive periods include (1) the socialization period from 3 to 12 weeks, (2) prenatal and neonatal experiences, and (3) secondary socialization and development through to maturity. Lack of stimulation, lack of handling, lack of exposure, insufficient socialization, and particularly stressful or traumatic events during these times can have a major impact on the pet’s behavior.

What tests can be done to determine a behavioral cause?

A good history is one of the most important means of determining the cause of a behavioral problem. This involves an in-depth analysis of the pet’s medical and behavioral history, including any training, as well as the circumstances surrounding the problem itself. Daily interactions with the pet and any changes in schedule need to be explored.

Often the event that precipitated the behavioral change may be different from that which maintains it. If you can catch the problem on video, this can be a valuable diagnostic aid for the veterinarian. Perhaps the most important element in determining the cause of the problem and what diagnostic workup might be needed will be the clinical signs that you report. Because we cannot ask the pet how it is feeling or if anything hurts, we will need to find out from you, the pet owner, all of the signs that your pet is exhibiting, both behavioral and medical. Then based on the history you provide, previous health problems, any medications that your pet might be taking, and the findings of a physical examination, additional diagnostic tests might be warranted. A final diagnosis of a behavioral cause can only be made after all medical factors have been ruled out.

What medical conditions can cause or contribute to behavior problems?

A decline in the pet’s hearing, sight, or other senses; organ dysfunction (e.g., liver or kidney disease); hormonal diseases; diseases affecting the nervous system; diseases of the urinary tract (infections, tumors, or stones); any disease or condition that might lead to pain or discomfort; and problems that affect the pet’s mobility can all cause or contribute to behavior problems.

1. Any condition that leads to an increase in pain or discomfort can lead to increased irritability, increased anxiety or fear of being handled or approached, and ultimately to increased aggressiveness.
If these aggressive displays are successful at removing the “threat” (and they usually are), the behavior is reinforced. Medical conditions that affect the ears, anal sacs, teeth and gums, bones, joints, or back (discs) are some of the more common causes of pain and discomfort. If the pet’s mobility is affected, it may become increasingly aggressive, choosing to threaten and/or bite, rather than retreat. A decrease in mobility could also affect urination and defecation by reducing the pet’s ability to utilize its elimination area.

"If these aggressive displays
are successful at removing the ‘threat,’
the behavior is reinforced."

2. Sensory dysfunction: Pets with diminished sight or hearing may have a decreased ability to detect or identify external stimuli, and might begin to respond differently to commands, sounds or sights. Sensory decline is more likely to be seen as pets age.

3. Diseases of the internal organs, such as the kidneys or liver, can cause a number of behavior changes, primarily due to the toxic metabolites that accumulate in the bloodstream. Organ decline and dysfunction is more common in the older pet. Any medical condition that causes an increased frequency of urination or decreased urine control, such as kidney disease, a bladder infection, bladder stones, or neurological damage, might lead to an increase in house soiling. Similarly, those problems that affect the frequency of bowel movements or bowel control, such as colitis or constipation, might lead to house soiling.

4. Diseases of the nervous system (brain and spinal cord) can lead to a number of behavior and personality changes. Conditions such as epilepsy, brain tumors, infections, immune and degenerative diseases can all directly affect a dog or cat’s nervous system and therefore its behavior. In the older pet aging changes can have a direct effect on the brain, leading to cognitive dysfunction and senility.

5. The endocrine (hormone) system also plays a critical role in behavior. Overactivity or underactivity of any of the endocrine organs can lead to a number of behavior problems. The thyroid and parathyroid glands (in the neck), the pituitary gland (in the brain), the adrenal gland (by the kidneys), the pancreas, and the reproductive organs can all be affected by conditions or tumors that lead to an increase or decrease in hormone production. Endocrine disorders are more likely to arise as the pet ages.

6. The aging process is associated with progressive and irreversible changes of the body systems. Although these changes are often considered individually, the elderly pet is seldom afflicted with a single disease, but rather with varying degrees of organ disease and dysfunction. Cognitive decline and senility have also been recognized in older dogs and cats (see (9) Senior Pet Behavior Problems and (10) Senior Pet Cognitive Dysfunction).

What tests need to be done to determine if my pet’s behavior problem is due to a medical condition?

1. Clinical history and physical examination
The assessment begins with a clinical history and physical examination. Remember that the history you provide may be the only way to determine if there are behavioral or medical changes. Be certain to mention any changes or problems that you may have noticed in your pet’s behavior, no matter how minor. Based on the signs that you report and the findings of the examination, laboratory tests and a more comprehensive examination such as a neurological examination or sensory testing may be required. For some of these tests, your pet may need to be referred to a specialist.

2. Medical, surgical, dietary, or pharmacologic treatment
Before beginning behavior therapy, any medical problems that have been diagnosed should be treated. A change in diet or a drug trial may be an important aspect of differentiating a medical from a behavioral cause (such as a food trial or steroid trial that might be used to rule out an underlying allergic cause). Surgery may be indicated when a tumor is diagnosed or when castration is indicated to reduce male sexually influenced behaviors. Your veterinarian may commence medical and behavioral treatment for long-standing behavior problems. One or more of a variety of behavioral drugs and supplements might be useful or necessary depending on the type, intensity, and severity of the behavioral disorder.

© Copyright 2014 LifeLearn Inc. Used and/or modified with permission under license.