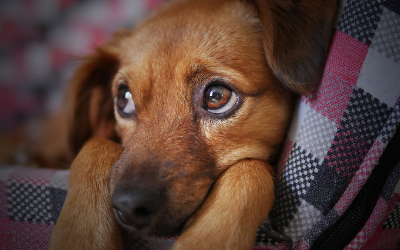 Do you ever feel like your dog is speaking to you when he gazes at you with his puppy eyes? Have you ever fallen for that cute little raised eyebrow and let your dog jump up on the couch even though it’s off-limits? Or been late for work to spend a few extra minutes rubbing his belly, because, well, he’s just so hard to resist?!

New research suggests that there are anatomical facial differences between domestic dogs and wolves – the ancestors from which domestic dogs evolved. In dogs, but not wolves, there are a pair of muscles surrounding the eyes responsible for that “puppy dog” look that they give you. These muscles allow them to raise their inner eyebrow – a look that wolves cannot pull!

The levator anguli oculi medialis (LAOM) and retractor anguli oculi lateralis (RAOL) eye muscles are well-developed in dogs, forming two straight lines above and towards the outer edge of the eyebrow. These muscles connect the ring of muscles around the dog’s eyes to both ends of the eyebrows, allowing dogs to widen their eyes – making them appear “cuter.” They also allow that “eyebrow raise” that tends to melt our hearts… and allow the rules to be broken!

Previous research has shown that people are moved by, or prefer, infant-like features (e.g., big or wide eyes) in dogs. We often relate to dogs with such features as if they were infants, cooing over their cuteness. Add to this the ability to raise eyebrows and our nurturing instinct can go into overdrive! People see this ability as humanlike and are more likely to interact with dogs that can raise their brows. Facial expressions are an important way that we communicate with one another – human or animal!

Over successive generations, natural selection results in characteristics becoming more common (or rare) within a population. It appears that the ability of dogs to raise their eyebrows was the result of selection pressure based on human preferences – enough pressure for additional muscles to evolve!

While humans may not have purposefully bred dogs for this trait, it seems that Fido’s ancestors with expressive eyebrows produced a nurturing instinct and humans favored these dogs causing “selection” for those characteristics.

Research has shown that another behavioral adaptation – the use of eye contact – enables dogs to connect and communicate with us. Dogs establish eye contact with humans at an early age, relating to us, and especially use it to their advantage when they are unable to solve a problem on their own. When they see our gaze upon them, they know that our communication is directed to them. Interestingly, eye contact between dogs and humans leads to an oxytocin feedback loop, much like the feedback loop between a mother and infant. In this feedback loop, eye contact causes oxytocin (in both the dog and the person) to be released, which, as a result, increases the motivation to establish eye contact again. None of these adaptations occurs between wolves and humans.

The next time your pup gives you that look, know that it’s no accident! He really is pulling on your heart strings! Give him an extra snuggle – that’s the power of “puppy eyes”!