Salt Lamps and Your Pet’s Safety 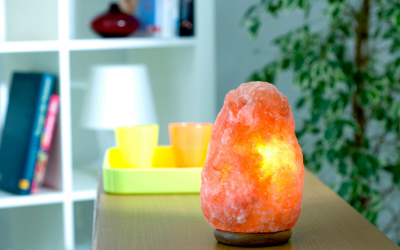 The pink glow emitted from Himalayan salt lamps creates a warming serene atmosphere that many believe also cleans the air, improves your mood, and helps you sleep. The salt is sourced from a salt mine in Pakistan and gets its pink color from the minerals (calcium, magnesium, potassium, copper, and iron) that were present in the water of an ancient inland sea that dried up thousands of years ago, leaving these colorful salt deposits.

Sodium (which, when combined with chloride, makes “salt” i.e., NaCl) is an essential mineral in our pet’s diets and is one of the body’s “electrolytes.” Sodium is needed for many body processes, including muscle and nerve function, in addition to controlling the fluid in the blood (the blood volume) and around cells. Too much (or too little) salt can cause serious health problems.

The odd lick of a salt lamp is unlikely to cause harm, but if your cat or dog gets hooked on the salt – much like we get hooked on potato chips – that’s when problems can arise. If your pet likes the salt, he may become “addicted” and go back to it again and again – leading to salt toxicity.

Salt toxicity occurs when the body has way too much salt, so much so that the kidneys can no longer return the blood volume back to normal by excreting the excess sodium through the urine. As the blood sodium levels increase, fluid is pulled out of cells and tissues increasing the blood volume and causing muscle and nerve dysfunction. Because the brain is very sensitive to changes in blood sodium, the first signs to appear with salt toxicity are usually neurological. These include altered mental status, staggering, vomiting, difficulty seeing, and seizures.

While salt lamps may have health benefits to you, consider your furry friends and find a place for your salt lamp that will be out of harm’s way! There’s no need to give up your salt lamp, BUT, if you’ve noticed your pet licking it on more than one occasion, it’s definitely time to move it to an inaccessible area – and mention it to your veterinary healthcare team!